[Skip to Content]
close
Trailforks Pro introductory sale, 50% off first year! Get Trailforks Pro
How to stop a sensitive or illegal trail from being added?

In the local Vancouver area, there is some debate whether trails should be labelled as 'illegal' or 'unsanctioned'. There is good argument that they are 'unsanctioned', but either way there are lots of trails in a grey area around the world. Different regions will have differing policy towards sensitive or unsanctioned trails, so Trailforks doesn't enforce a standard, each local trail association can decide on how much info for these trails to allow online.

We have various levels of visibility and warnings, offering more control then a simple binary visible/hidden option.

A trail association may choose to not make public all or certain grey-area trails online, but given Trailforks crowdsourced nature, others might add one of these trails in the future, not knowing they shouldn't be public. So Trailforks provides a range of features to help prevent & monitor for unsanctioned trails, if a region so wishes.

The simplest step is to "subscribe" to the regions you want to monitor, you can choose to get an email notification whenever a new trail is added in the region. So you don't have to manually check Trailforks. (short tutorial video on subscribing) 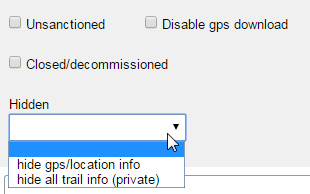 Unsanctioned trails can be added to Trailforks and marked as "hidden", so only region administrators with "view hidden trails" permission can see them. Now when a user adds a trail where the GPS track closely matches a trail in the database that is marked as "hidden", the user will get a big red warning.

They can still submit the trail at this point if they wish, but it still needs to be approved by a moderator and the trail will be flagged for the moderator, so they know to most likely reject it.

OTHER BENEFITS TO MAPPING ILLEGAL TRAILS

Adding illegal trails and marking them hidden also allows us to detect users ridelogs along any "hidden/secret" trails and flag that ridelog as "sensitive". The hidden trails won't be shown in the list of trails ridden, the ridelog map will be hidden and a warning message will be displayed on that ridelog.

Unfortunately many people don't have enough personal discretion to make certain rides in sensitive areas private, so we do it for them!

Another important reason to map illegal trails and have ridelogs that include them flagged, is those ridelogs will no longer be suggested to users in the Trailforks app when a user views another trails rides. Trailforks also has a feature where we try and determine the most popular routes in a region based on users ridelog data, ridelogs flagged sensitive because they matched to a hidden trail will not be included in the recommended route algorithm.

Mapping hidden trails also allows us to block out the areas around them from our heatmap features.
We also have a black-out zone feature, where the polygon of an hidden region can be totally excluded from our heatmap.

And finally having a hidden trail mapped still allows ride usage data to be collected for it, which could effect advocacy decisions.
You must login to Trailforks.